Tension in Mohali: Farmers moving towards Chandigarh broke the first barricade, staged a protest on the second, the administration sealed the boundaries 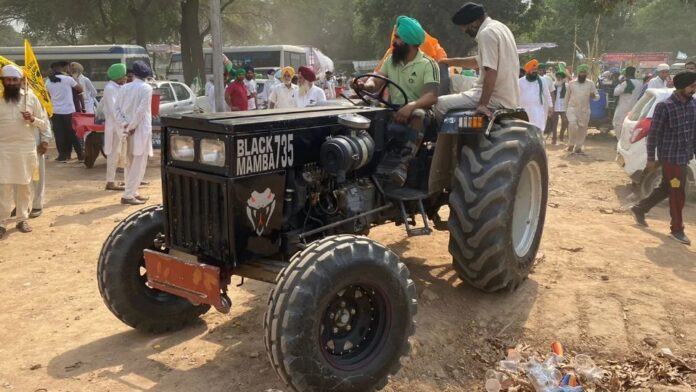 The farmers are protesting against the divisional level transplantation and power cuts, including increasing the compensation for the wheat crop. At the same time, due to the farmers gathered in Mohali in the morning, the traffic system in the entire city got disturbed.

The farmers of Punjab on Tuesday sounded the bugle of struggle against the Punjab government led by the United Kisan Morcha. Farmers marched towards Chandigarh on Tuesday to set up a firm front on the lines of Delhi. Mohali police barricaded them to stop them.

Farmers have broken the first barricade. At the same time, they have been stopped at the second barricade. After this, the farmers announced to hold a pucca dharna there. Dalewal and Lakhhowal appealed to all the farmers on the mic to calm down and sit on this place, sitting here they would protest against the government. On the other hand, some youths were trying to march towards Chandigarh, despite being told by the farmers’ leaders, but they were stopped by strict action by the farmers’ leaders. Earlier, DIG Gurpreet Bhullar talked to the farmers leaders and explained them but the farmers did not agree.

The protesting farmers demanded a bonus of Rs 500 for wheat. He said that the CM agreed to this but did not issue the notification. We also demand notification for MSP on Basmati, Moong. Prepaid electricity meters should not be installed. Till the demands are met, we will go to Chandigarh and put up a Delhi-like front.

The farmers have reached Mohali under the banner of United Kisan Morcha. The farmers told that the government was taking their struggle lightly. When the trolleys came out of the village towards Mohali at night, the government swung into action. During this, earlier he started getting calls from senior officers of Agriculture Department, officials of Mohali administration. Assurances were being given to hold a meeting with the Chief Minister in the night itself. At that time the farmers had decided that the farmers would go to Mohali. Whatever decision is taken after that will be seen.

Tippers erected on the roads to stop the farmers
Seeing the convoy of farmers, a joint meeting was held between the officials of Chandigarh Administration and Mohali on Monday night itself. Pucca barricades were put up in the area bordering Chandigarh and Mohali at 12 o’clock only. In addition, CCTV cameras were installed. Tippers were erected in addition to barricades on major roads on Tuesday morning. So that farmers can’t move forward. Apart from this, more than two thousand police personnel have been deployed in an area of ​​about three kilometers.