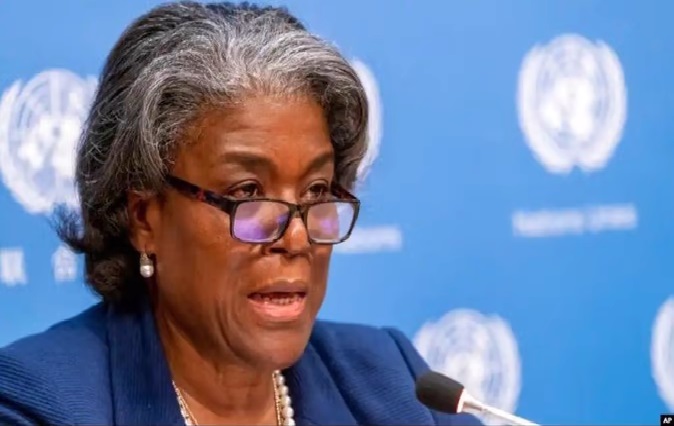 US Ambassador to the United Nations Linda Thomas Greenfield said it would be discussed in the Security Council along with India. It is expected that India will reconsider lifting the ban.

The US has opposed the ban imposed by India on wheat exports due to rising prices in the domestic market. US Ambassador to the United Nations Linda Thomas Greenfield has expressed fears that India’s move could aggravate the world’s food crisis.

Greenfield said that we have seen the report of India’s decision to ban wheat exports. We are encouraging various countries not to restrict exports, as we feel that any restrictions on exports will lead to further shortage of food grains. It will be discussed in the United Nations Security Council along with India. It is expected that India will reconsider lifting the ban.

The US ambassador said that India will attend the meeting of the Security Council convened by us and we hope that it will reconsider its decision in view of the concerns expressed by other countries.

Taking a big decision recently, the Government of India had banned the export of wheat with immediate effect. Wheat has been kept in the restricted category of export. It has been said by the government that this step has been taken in view of the food security of the country. At the same time, it was necessary to do this to support neighboring countries and poor countries. Meanwhile, let us tell you that the countries which have already been allowed to export it, will continue to export it. The Directorate General of Foreign Trade (DGFT) has said in a notification issued on May 13 that export of consignments for which irrevocable letters of credit (LoCs) have been issued on or before the date of this notification will be allowed.

Huge increase in prices, now fall
It is worth noting that due to the ongoing war between Russia and Ukraine, there was a strong increase in the prices of wheat all over the world. In India too, the price of wheat has increased at the domestic level, after the ban on exports, the prices have started coming down. India is the second largest producer of wheat in the world. The country exported a total of 70 lakh tonnes of wheat for the financial year 2021-22, while in the month of April last, India has exported a record 14 lakh tonnes of wheat.

Government procurement now till 31 May
Giving a big relief to the farmers, the central government has extended the wheat procurement deadline to 31 May. Union Food Minister Piyush Goyal announced this while tweeting a copy of the order. Now farmers have got 15 more days to sell wheat at MSP. Due to favorable weather this year, the yield of Rabi crop has been good. But in many parts of the country, the farmers were upset for a few days due to not being able to sell their crops by the stipulated time limit, despite the tremendous yield of wheat. This year the minimum support price of wheat has been fixed at Rs 2015 per quintal. At this price, now crores of farmers of the country will be able to sell wheat till May 31.

The government will also get the support of the main opposition party Congress regarding the Agneepath scheme in the Punjab Assembly session. Leader of Opposition...
Previous articleLIC IPO Listing: LIC shares listed in the stock market with discount, investors got a shock on the very first day
Next articleMonday Box Office Collection: Amy Virk’s bale bale, Mahesh Babu’s fragrance prevails, KGF at 2 crores and Marathi …