Demonstration in Punjab: After farmers, teachers also took to the streets, scuffled with police on Mohali border, willing to enter Chandigarh 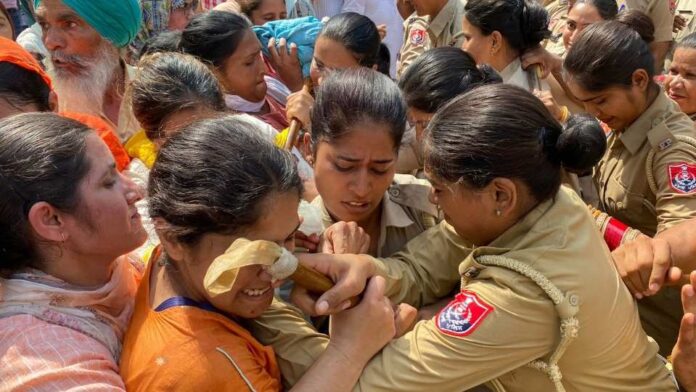 He is the same teacher who fought for almost two months in Mohali before the elections. Delhi Chief Minister and AAP convener Arvind Kejriwal himself had reached his dharna. He had assured that all the teachers would be confirmed when his government came.

The farmers’ issue had not even been settled yet, that on Wednesday even the raw teachers got down the path of struggle. During this he tried to march towards Chandigarh but was stopped at YPS Chowk itself. During this visit there was a scuffle between the police and the raw teachers. The teachers say that the government cheated them too. The government had promised before coming to power that they would be confirmed on the basis of initiative. But now they are not being taken care of.

Around two o’clock on Wednesday afternoon, a large number of raw teachers reached near Gurdwara Sri Amb Sahib. During this, the police tried to convince them a lot, but the raw teachers were not ready to listen to a single word of the police. He says that today he has come to get his right. In such a situation, he will leave only after going to Chandigarh CM residence. During this the Mohali police tried to stop them. Women teachers say that male employees have been deployed in front of women, which is completely wrong.

On this, the police say that no contest is being conducted here. He is performing his duty. No one will be allowed to proceed at any cost. Law and order will not be allowed to deteriorate. The person who breaks the rules will be put in jail. Let us tell you that these are the same teachers, who fought for about two months in Mohali before the elections. Delhi Chief Minister and AAP convener Arvind Kejriwal himself had reached his dharna. He had assured that when his government comes, all the teachers will be confirmed but now no hearing is taking place.

The government will also get the support of the main opposition party Congress regarding the Agneepath scheme in the Punjab Assembly session. Leader of Opposition...
Previous articleLancet study: 23.5 lakh deaths in the world due to pollution in India in 2019, Lancet report
Next articlePunjab: Two spies who sent intelligence to ISI arrested, pictures of army vehicles, maps found from mobile