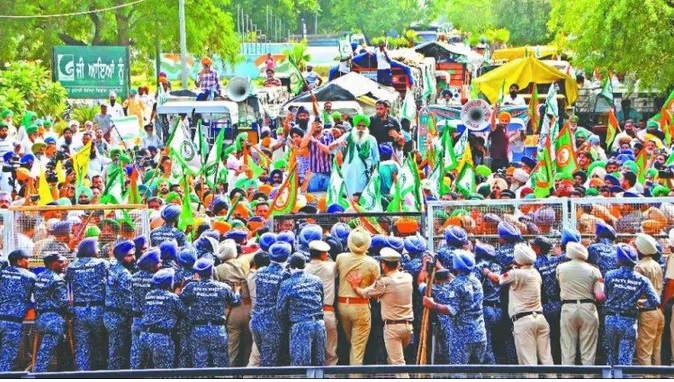 Describing the farmers’ agitation as unnecessary and unwanted, Punjab Chief Minister Bhagwant Mann appealed to the farmer unions to stop shouting slogans and cooperate with the state government in saving the depleting water level in Punjab.

The farmers of Punjab under the banner of United Kisan Morcha, adamant on many demands, put up a firm front on the Mohali-Chandigarh border on Tuesday. Farmers have arrived at YPS Chowk in Mohali with all the logistics and langar items on tractor-trolleys. He announced to march towards the Chief Minister’s residence in Chandigarh if the demands were not met till Wednesday morning. The farmers said that whether they have to use sticks or break the barricades. Meanwhile, the Punjab government has also called a cabinet meeting.

Farmer leaders could not hold a meeting with the Chief Minister on Tuesday afternoon and Chief Minister Bhagwant Mann had also left for Delhi in the afternoon, where he met Aam Aadmi Party supremo Arvind Kejriwal. CM Bhagwant Mann appealed to the farmers to save water instead of raising slogans.

Punjab cabinet meeting today
The Punjab government is closely monitoring the performance of the farmers. Chief Minister Bhagwant Mann has called a cabinet meeting at 10:30 am on Wednesday. Farmers’ movement will be discussed in the meeting. The government may bow down to some demands.

Could not hold meeting with farmers
At 11 am on Tuesday, the Punjab government called the farmer leaders for a meeting, but the farmer leaders remained adamant that the Chief Minister himself should attend the meeting or any competent minister or officer, who could solve the demands of the farmers. The meeting could not take place due to various conditions. The farmers marched towards Chandigarh after Ardas at three o’clock in the afternoon. The police barricaded two places and stopped them by standing tippers on the roads. The farmers first broke a barricade of the Mohali police, but due to not being able to move forward, they put up a firm front there.

Try to save water instead of raising slogans: Mann
Describing the farmers’ agitation as unnecessary and unwanted, Punjab Chief Minister Bhagwant Mann appealed to the farmer unions to stop shouting slogans and cooperate with the state government in saving the depleting water level in Punjab. He clearly said that his doors are always open for dialogue with the farmers. I myself am the son of a farmer and I know very well what farmers need.

Main demands of farmers
1. 500 per quintal bonus should be given for the reduction of wheat bush.
2. Uninterrupted power supply should be provided in entire Punjab from June 10 for sowing of paddy.
3. A notification should be issued for the purchase of Moong, Maize and Basmati on MSP.
4. The MSP of Basmati should be given Rs.4500.
5. Farmers occupied by panchayat lands should not be removed.
6. Warrants and attachments on loans by co-operative banks and other institutions should be stopped.
7. Farmers’ loans up to Rs 2 lakh should be waived.

The government will also get the support of the main opposition party Congress regarding the Agneepath scheme in the Punjab Assembly session. Leader of Opposition...
Previous articleTension in Mohali: Farmers moving towards Chandigarh broke the first barricade, staged a protest on the second, the administration sealed the boundaries
Next articleBhagwant Mann’s big statement: Said farmer movement unnecessary, I am also a farmer’s son, I know well what is the need