Mann met Shah: Discussion on the issue of farmers, national security and BBMB, 2000 paramilitary personnel will be deployed in Punjab 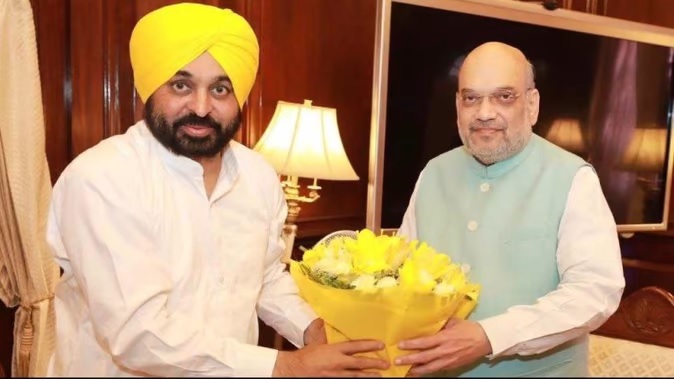 Discussed the demands of farmers, representation of Punjab in BBMB, stopping of drones on the border, MSP on Basmati… border areas and security in Punjab. The Home Minister assured to look into all the demands.

Punjab Chief Minister Bhagwant Mann met Union Home Minister Amit Shah in New Delhi on Thursday. CM Bhagwant Mann said that 2000 additional paramilitary personnel will be deployed in Punjab as there are regular inputs that some elements are trying to create unrest in the state. During the meeting, Union Home Minister Amit Shah assured CM Mann of all possible help from the central government.

The Punjab CM told the media that there have been regular inputs that some miscreants are trying to create trouble in Punjab. That’s why I have requested the Home Minister to sanction additional forces for the security of the state. 10 companies of paramilitary forces have already reached Punjab, while another 10 companies will be approved by the Union Home Ministry soon. Let us tell you that there are about 100 soldiers in a company of paramilitary forces.

No compromise on national security
CM Mann said that the Union Home Minister told him that there is no compromise on national security and it is above party politics. The central government will provide all possible help to the Punjab government. CM Mann apprised the Home Minister about the supply of weapons from across the border through drones and sought help from the Central Government in dealing with it. According to sources, security agencies have been put on alert ahead of the 38th anniversary of Operation Blue Star and security has been beefed up in Amritsar.

Discussed the demands of farmers, representation of Punjab in BBMB, Drones on the border, MSP on Basmati… border areas and security in Punjab. The Home Minister assured to look into all the demands.
Bhagwant Mann, Punjab CM

The government will also get the support of the main opposition party Congress regarding the Agneepath scheme in the Punjab Assembly session. Leader of Opposition...
Previous articleSunil Jakhar Joins BJP: Sunil Jakhar joined BJP in Delhi, resigned from Congress a few days ago
Next articleBollywood actress Archana Purna Singh’s virtual appearance in Jalandhar court, hearing in the case of Rs 1.40 crore entertainment scam