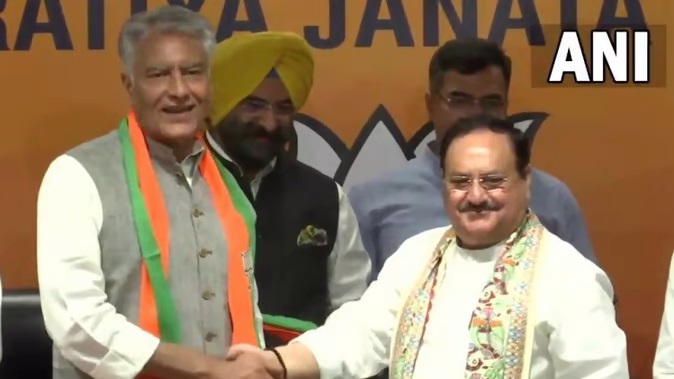 Sunil Jakhar while joining BJP said that three generations of my family have served the Congress party in the last 50 years. Today I broke my 50 years old ties with the Congress on the issues of nationalism, unity and brotherhood in Punjab.

Sunil Jakhar, one of the veteran leaders of Punjab, has joined the BJP. He joined the Bharatiya Janata Party in the presence of party president JP Nadda in Delhi. During this, Nadda said that I welcome Sunil Jakhar to the Bharatiya Janata Party. He is a seasoned political leader who made a name for himself during his political career. I am sure he will play a big role in strengthening the party in Punjab. Jakhar had said goodbye to the Congress a few days ago by going live on social media.

Jakhar is a veteran Hindu leader of Punjab
Sunil Jakhar, one of the veteran Hindu leaders of Punjab, is the son of former Lok Sabha Speaker Balram Jakhar. Sunil Jakhar, born in 1954 in the Jakhar family, won the election of consecutive MLA from Abohar constituency from 2002 to 2017. In the 2017 assembly elections from Abohar, he was defeated by a BJP candidate. After this, after the death of MP Vinod Khanna, in 2017 he contested the by-election from Gurdaspur Lok Sabha seat. In 2017, Jakhar was appointed as the President of Punjab Congress.

In 2019, he again contested the Lok Sabha elections from Gurdaspur seat, but he lost.

Angry over not fulfilling the promise of Congress High Command
Sunil Jakhar, who said goodbye to the Congress by going live on social media, was very angry with the party high command. Before the assembly elections, when the high command removed him from the post of state head and handed over the command to Navjot Sidhu, then he was assured of giving him a big responsibility. Jakhar left the post peacefully at that time but after that he was also thrown out of the race for the new chief minister. Jakhar was feeling marginalized after the condition of the party in the assembly elections.

With the resignation of Captain Amarinder Singh as Chief Minister in Punjab in September 2021, the script for Sunil Jakhar’s resignation started. Jakhar was angry with the central leadership for not being made the Chief Minister even after the consent of 42 MLAs. After this, he had shied away from active politics in the assembly elections held in February.

According to political experts in Punjab, the script for Sunil Jakhar’s resignation started when the Congress high command replaced Captain Amarinder Singh with Charanjit Singh Channi as the chief minister. In February, he announced his retirement from active politics. With this, he refused to contest the assembly elections. His anger towards the central leadership came out when he was campaigning for his nephew in the assembly elections.

During this, he claimed that after the sudden resignation of Amarinder Singh last year, 42 MLAs wanted him to be the Chief Minister of Punjab, yet he would continue to be a part of the Congress. After this, he had also opened a front against the central leadership by making a statement against former Chief Minister Charanjit Singh Channi, after which disciplinary action was taken against him by the party high command. He was angry with the central leadership regarding all these matters. He was also unhappy with the attitude of former Punjab Congress in-charge Harish Rawat and current Punjab Congress in-charge Harish Chaudhary.

The government will also get the support of the main opposition party Congress regarding the Agneepath scheme in the Punjab Assembly session. Leader of Opposition...
Previous articleSC Verdict on Navjot Sidhu: Navjot Sidhu sentenced to one year, Supreme Court’s decision in 34-year-old road rage case
Next articleMann met Shah: Discussion on the issue of farmers, national security and BBMB, 2000 paramilitary personnel will be deployed in Punjab