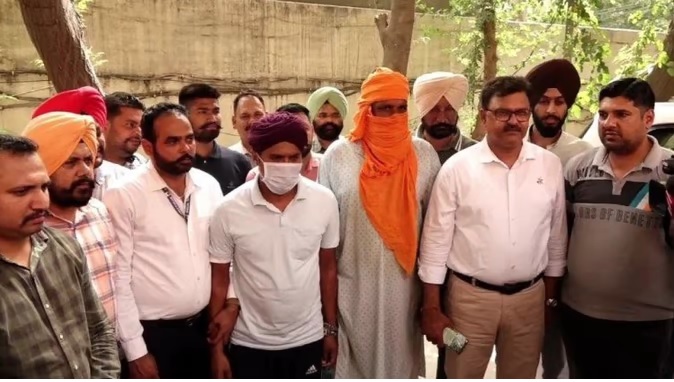 There was a blast in the Ludhiana court last year. The accused of planting the bomb was killed in the blast. The connection of this blast was related to terrorist Jaswinder Multani. Now the Punjab Police has caught the main accused.

The Punjab Police has busted the Ludhiana court blast case and caught the main accused. DGP Punjab VK Bhavra gave this information in a tweet on Saturday. The DGP said that the main accused of the Ludhiana court blast has been arrested by the STF team of the Border Range. The IED used in the blast was smuggled in through ISI-backed drones. The DGP said that this operation was conducted in coordination with the central agency.

Amritsar Police has arrested four people after raiding the border villages. Weapons, explosive material and heroin have been recovered from their possession. Among those arrested is a Class VIII student who was in contact with the smugglers. The STF took this major action before the Ghallughara to be celebrated on the anniversary of Operation Blue Star on June 6 in Punjab.

IG Border Range Mohnish Chawla said that the police arrested Dhanoa Kalan residents Harpreet Happy, Chak Allah Baksh Dilbag Singh alias Bago and Dhanoa Khurd Savinder Bhalla besides a class VIII student by raiding various places in the city. He said that the student has been sent to Child Care Centre, Ludhiana after being produced before the Juvenile Court. While three other arrested people are being questioned by taking them on police remand.

Were in contact with pakistani smugglers
IG Chawla said that the accused Savinder Singh and Dilbagh Singh were arrested on May 18. During investigation, he told that they had ordered a consignment of heroin from Pakistan-based smuggler Haji Akram on the night of May 12, who both distributed 500 grams each. The said heroin was recovered from both of them during remand. Dilbag Singh admitted that he also has two Pakistani SIMs, through which he talks to Pakistani smugglers. During investigation, the police also recovered a Nokia mobile phone with two Pakistani SIM cards from the possession of the accused.

He said that Dilbagh alias Bago admitted that he was involved in the blast that took place on 23 December 2021 at the Ludhiana Court Complex. He also admitted that he also recovered the IED through a drone in the border village of Baldwal, which was sent at the behest of the ISI. He gave the IED to Surmukh alias Sammu, a resident of village Panju Kalal in Amritsar at the base of Chaugaona village. Bago said that he gave the IED on the Ludhiana bypass to Gagandeep Singh, a sacked cop of Punjab Police, who was killed in the blast at the Ludhiana Court Complex. He said that after questioning Bago, Surmukh Singh of Panju Kalal village was arrested.

The STF had recovered three IEDs in January and February 2022, which were to be used for blasts in Punjab. The IG said that the student of class VIII was arrested during the investigation. He has played the role of providing internet services on mobile phones to the above three arrested accused Savinder Singh alias Bhola, Dilbag Singh alias Bago and Harpreet Singh alias Happy. During investigation it also emerged that there is no direct role in the trafficking of the arrested Class VIII student.

The government will also get the support of the main opposition party Congress regarding the Agneepath scheme in the Punjab Assembly session. Leader of Opposition...
Previous articleAppointment: Vivek Kumar becomes PM Modi’s personal secretary, know everything about him
Next articleApple: ‘Zero Covid policy’ became a headache for China, Apple may increase production in India