Weather News: Rain gave relief from heat in Punjab, yellow alert today, advice not to leave the house in these areas 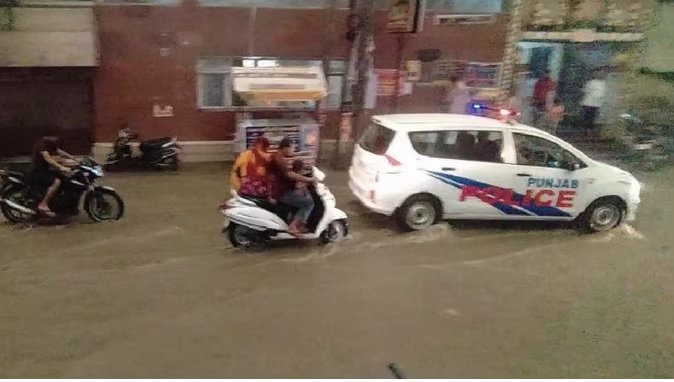 In Punjab, the Meteorological Department has issued a yellow alert regarding rain on Tuesday. The department has predicted strong winds with a speed of 40 to 50 km with rain. Due to the rain on Sunday night, the maximum temperature of the state has dropped by 8 to 10 degrees Celsius.

The Meteorological Department has issued a yellow alert regarding rain in Majha, Doaba and East Malwa except West Malwa. In the bulletin issued by the department, it has been said that the eastern part of Majha, Doaba and Malwa will have strong winds with a speed of 40 to 50 km. Also, there is a possibility of rain with thunder. However, the weather is expected to remain dry from May 25 to 27.

18 mm rain in Ludhiana
On Sunday night, Ludhiana received the maximum rainfall of 18 mm. After this, 17.6 mm of rain was recorded in Patiala, 11.5 in Mohali and 10 mm in Pathankot. The lowest rainfall occurred in Firozpur district. It received 0.5 mm of rain in 24 hours.

The mercury dropped by 7.4 degrees in Chandigarh due to rain
Chandigarh received 11.5 mm of rain late Sunday night due to the active western disturbance. As a result, a drop of 7.4 degrees Celsius was recorded in the day’s maximum temperature on Monday. Due to this people heaved a sigh of relief. According to the Meteorological Department, a weak Western Disturbance entering the northern mountainous areas has led to an induced cyclonic circulation over West Rajasthan and East Pakistan, due to which the surrounding states including Chandigarh, Punjab, Haryana will receive wind and light rain. activities have been observed.

After 12 o’clock on Sunday night, rain started in the adjoining areas including Chandigarh, which continued intermittently till Monday night. The residents of the city are enjoying this change of weather very much. In the evening, a huge crowd gathered at Sukhna Lake and people were seen walking. According to the Meteorological Department, Chandigarh recorded a maximum temperature of 30.7 degrees Celsius and a minimum temperature of 19.1 degrees Celsius on Monday. It was 30.6 degrees in Panchkula and 30 degrees in Mohali. Strong winds and light rain have been predicted in Chandigarh on Tuesday as well.

The government will also get the support of the main opposition party Congress regarding the Agneepath scheme in the Punjab Assembly session. Leader of Opposition...
Previous articlePunjab on Alert: ISI was planning to blow up Amritsar-Delhi train; terrorist Surmukh was given Rs 1 lakh per IED
Next articleCongress Leader Acharya Pramod Krishnam Allegation Left Captured Congress BJP Agents Active In The Party