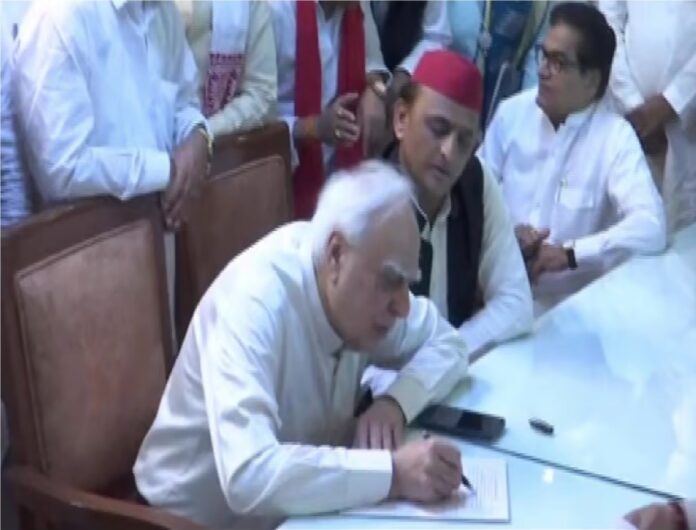 As soon as the names were announced by the Samajwadi Party regarding the Rajya Sabha elections, Kapil Sibal’s name surprised everyone. After this, everyone started thinking that Kapil Sibal had not said goodbye to Congress, otherwise how did he become a candidate of Samajwadi Party? Meanwhile, news came that Kapil Sibal is going to file his nomination today and is accompanied by Akhilesh Yadav and Ram Gopal Yadav. The suspense was still intact and in the meantime he staked his claim for the Rajya Sabha. Samajwadi Party chief and many party workers were present with him. After this Kapil Sibal comes in front of the media and tells that he has left the Congress on 16th May itself! After this, he also clarifies that he has filed nomination in Rajya Sabha as an independent candidate. Know what Kapil Sibal said about Azam Khan to the current politics of the country-

Sibal expressed his gratitude to Azam
After filing his nomination for Rajya Sabha with the support of Samajwadi Party, Kapil Sibal said that I have filed nomination for Rajya Sabha as an independent candidate. I am grateful to Akhilesh Yadav for supporting me. I also express my gratitude to Azam Khan. During this, when asked a question about Azam Khan, Sibal said that you should ask him. Let us tell you that earlier, on Tuesday, SP leader Azam Khan had said in a conversation with the media that if the party sends Supreme Court advocate Kapil Sibal to the Rajya Sabha, then it is a good thing. I would be most happy to send Kapil Sibal to Rajya Sabha. Even before this, he has praised Kapil Sibal and expressed his gratitude towards him.

I have resigned from Congress membership on 16th: Sibal
Kapil Sibal said that I was the leader of Congress, but now I am not. I have resigned from the membership of Congress on 16th. Expressing gratitude to SP President Akhilesh Yadav, he said that we are all coming together for 2024. Will highlight the shortcomings of the central government. Together they will talk in public.

On the nomination of Kapil Sibal, SP President Akhilesh Yadav said that today Kapil Sibal has nominated for the Rajya Sabha. He is going to Rajya Sabha with the support of Samajwadi Party. We hope that Kapil Sibal will be able to present his and the Samajwadi Party’s side on the big issues of the country. Akhilesh Yadav said that Sibal has also lived in the Lok Sabha. He also has a political career.

The government will also get the support of the main opposition party Congress regarding the Agneepath scheme in the Punjab Assembly session. Leader of Opposition...
Previous articlePunjab News: No new health minister in Punjab, CM Bhagwant Mann will keep the department with himself
Next articleGyanvapi Case: Hearing on three demands including handing over of Gyanvapi complex to Hindu side, now in fast track court, date fixed for May 30