‘Why insult Arunachal?’: Moitra furious over transfer of IAS couple who vacate stadium to roam dog 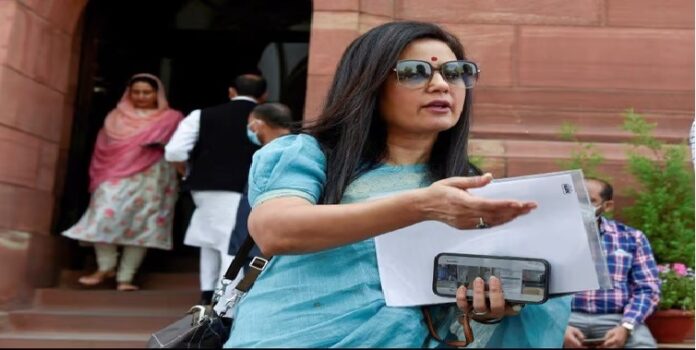 Hours after a media report regarding misuse of facilities at Delhi Tyagaraja Stadium by IAS Sanjeev Khirwar and his wife Rinku Dugga, the Home Ministry on Thursday took action against both of them.

The controversy surrounding the transfer of IAS Rinku Dugga and her husband IAS Sanjeev Khirwar, who were involved in the controversy of vacating Delhi’s Thyagaraj Stadium early in the night and walking their dog there, has heated up. Trinamool Congress MP Mahua Moitra and former CM Omar Abdullah have also raised questions on this. Moitra has called it disrespectful to Arunachal.

Hours after a media report regarding misuse of facilities at Delhi Tyagaraja Stadium by IAS Sanjeev Khirwar and his wife Rinku Dugga, the Home Ministry on Thursday took action against both of them. The ministry has transferred Sanjeev Khirwar and Rinku Dugga, both IAS officers of AGMUT cadre. Khirwar has been transferred from Delhi to Ladakh and Dugga has been transferred to Arunachal Pradesh. MP Moitra tweeted that by transferring IAS Rinku Dugga and Khirwar to the North Eastern states, the Ministry of Home Affairs has told that these states are ‘garbage throwing grounds’ in its eyes.

CM Khandu and Union Minister Rijiju should protest
Moitra tagged Arunachal CM Pema Khandu and Union Minister Kiren Rijiju and asked them to oppose this decision of the Ministry of Home Affairs. The Lok Sabha MP said that the transfer of an autocratic bureaucrat from Delhi to Arunachal Pradesh is a matter of shame for the state. The Trinamool MP said that the transfers made in the North East of these officers have made it clear that the Union Home Ministry shows only verbal love for the North East.

This is the whole matter
Athletes and coaches at the Thyagaraj Stadium in Delhi were upset for some time as they were being ordered to vacate the stadium so that the IAS officer’s dogs could walk there. When the same news came out in the media on Thursday, it started getting gritty everywhere. After this news came out, the Delhi government also became strict. The Delhi government issued an order saying that now every stadium in Delhi will be open for practice till 10 pm. After this news came to the fore, IAS Khirwar had said, ‘I will never ask an athlete to leave the stadium. I go after the stadium is closed… we don’t leave him (the dog) on ​​the track. If there is anything objectionable in it, I will stop it.

After this matter came to light, Union Minister Kaushal Kishor said that, it is very shameful that the players have to leave the stadium because an IAS officer has to walk his dog. The officer should apologize for this. This is abuse of authority.

According to the information, a coach giving coaching at Thyagaraj Stadium had claimed that till a few weeks ago, he used to train till around 8.30 pm but for some time he is being asked to vacate the stadium only at 7 pm. He gave the reason behind this that along with me other players and coaches are also asked to vacate the stadium so that an IAS officer can walk there with his dog. This creates a hindrance in the practice of us and the players.

The government will also get the support of the main opposition party Congress regarding the Agneepath scheme in the Punjab Assembly session. Leader of Opposition...
Previous articlePakistan: Petrol-diesel became costlier by Rs 30 per liter, Imran praised India again
Next articlePatiala: 6.66 crore scam in compensation of panchayat lands, two panchayat secretaries, one JE, 10 firms and four people nominated