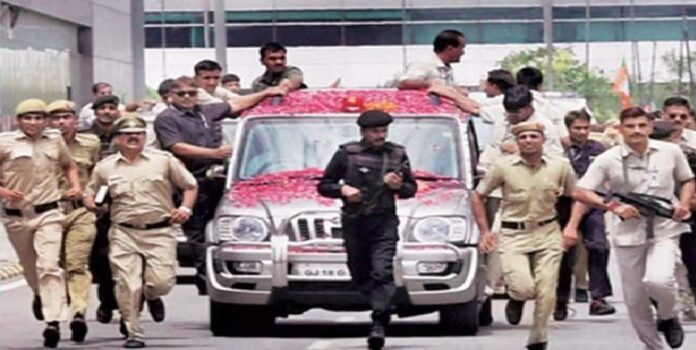 Keeping VIPs ‘safe’ in the country is getting costly. More than twenty thousand special and very special people have got a fixed number of security personnel. From the Prime Minister’s SPG security cover to Z+, Z, Y+, Y and X category security, the number of VIPs carrying one or two security personnel at the Center and in the state is huge. According to the officials engaged in VIP security, about 20 thousand VIPs remain ‘safe’ at an annual expenditure of Rs 12,000 crore. More than 60,000 soldiers are deployed in their security. More than 30,000 vehicles are being used for VIP security. In this expenditure, only the salary of security personnel and petrol and diesel of vehicles are included. For example, food, living, traveling allowance, risk allowance and many other types of expenses remain separate. Central and state governments bear this cost.

All of them had got police protection
The Punjab government has withdrawn the security given to 424 VIPs. The Punjab government had to spend a lot on VIP security. Even before this, the Bhagwant Mann government had called back many MLAs and police personnel deployed for the security of former MLAs and other leaders. Those whose security has been withdrawn include several retired police officers besides leaders of various parties. Security cordon was also provided to the dera and religious leaders. Some of the selected people or organizations whose security has been withdrawn are Dera Radha Soami Satsang Beas (10 policemen), Balvind Singh, former Congress MLA (one constable), Dera Divya Jyoti Jagran Sansthan Nurmahal (9 constables), Harpreet Singh Sidhu. ADGP (6 constables), MS Bhullar retired DGP (5 security personnel), Sanjeev Gupta retired IPS (4 security personnel), Paramraj Singh suspended IPS IG (4 security personnel), Harminder Singh Jassi (5 commandos), Tej Prakash Singh (5 Commando), SK Sharma former DGP (3 security personnel, two commandos) and Mohammad Mutastafa DGP ‘Retd’ have 3 security personnel. There are about 40 VIPs who have two armed policemen each. 124 VIPs have one armed police personnel each. 17 VIPs have 3-3 police personnel. Eight VIPs have four personnel each. 12 VIPs have separate commandos.

There is so much government expenditure on VIP security
According to the official related to security matters, the criteria for giving security vary. Security is available on the report of IB or local agency. However, states have their own criteria for providing security. Whether someone is in danger or not, security is given. In most of the states, security is getting on the strength of influence. There are 46 security personnel in Z+ security cover. There are 33 in Z, 11 in Y+, 8 in Y and from two to six in the X category. However, TA, DA and other allowances are rarely available. Do not live more than five to six thousand. Escort also operates in Z and Z Plus security. Many times a centrally protected person is provided security and vehicles by the state on his tour. About 240 people in the country have been given security by the Centre. This figure keeps on changing. Every day someone’s security is removed, then security is provided to another VIP. If we consider 230 VIVs here, then more than 25 hundred soldiers are stationed under their protection. SI, Inspector and AC also live in many places. The basic salary of a constable is 35 to 40 thousand. In this, the average salary of the soldier, including the officers, whose number is less, is

If you fix 45 thousand rupees per month, then in a month this salary becomes more than 11 crores. By the way, the rule is that if someone is going eight kilometers away from the headquarters, then he gets TA. House rents are also given to security personnel under X, Y and Z cities.

Rs 300 crore per month spent on 20,000 VIPs
According to the security officer, 66 thousand soldiers are deployed for the security of twenty thousand VIPs, then the average salary of a jawan is 45 thousand. In such a situation, this amount reaches up to Rs 300 crore. Earlier, one crore 62 lakh rupees were spent daily on the security of the Prime Minister. In the year 2014-15, the budget of SPG was Rs 289 crore. 330 crore in 2015-16 and this budget was increased to Rs 540.16 crore in 2019-20. The budget of SPG in the year 2021-22 was Rs 429.05 crore. At present, only PM Modi gets SPG protection, so the daily expenditure has come down to 1.17 crores. Talking about all the security people in the country, more than 30 thousand vehicles are also used for them. The train runs for twenty days in a month. If the cost of two vehicles for a day is five thousand rupees, then this expenditure remains more than 300 crores. The VIP train runs at least 50 kms daily. If we look at the security expenses of the Prime Minister and other VIPs, then it sits at more than Rs 12 thousand crore annually.

Where how many people have got VIP security
According to the 2019 report, 3,142 people were given security in West Bengal. After this the second number comes Punjab 2,594. In Bihar, 2,347 people, in Haryana 1,355 and in Jharkhand 1,351 people were given security. This number increases during elections. In Delhi, about 9 thousand soldiers are deployed in VIP security. More than five hundred people have got security. The special thing is that for this Delhi Police has to arrange vehicles from outside. An amount of more than Rs 53 crore is being spent annually on rental vehicles. Pilot escort operates in Delhi with many VIPs. For those who have got Z and Z plus category security, about Rs 11 lakh is being spent on daily frills. There are also many VIPs who do not have a separate vehicle for the security personnel. If there is a tour outside, then there is no arrangement to stay there. In such a situation, the security personnel have to take service from their nearby unit. You also have to make your own arrangements for eating and drinking.

The government will also get the support of the main opposition party Congress regarding the Agneepath scheme in the Punjab Assembly session. Leader of Opposition...
Previous articleEncounter in Anantnag: Encounter between terrorists and security forces in Anantnag, two terrorists eliminated, internet stalled
Next articlePatiala: Drug smuggler Jagdish Bhola shifted from Patiala to Gurdaspur jail, decision was taken on getting mobile