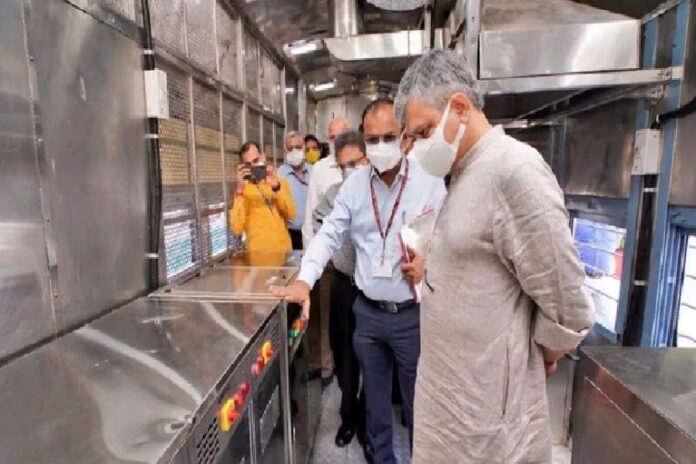 Railway Minister Ashwini Vaishnav inspected the operation of a sectional casting yard of Mumbai-Ahmedabad High Speed ​​Rail Corridor near Vaktana village in Choryasi taluka of Surat on Monday. Apart from this also visited Antoli Railway Station under construction under the project.

The Modi government is paying a lot of attention to the project of running a bullet train between Gujarat’s capital Ahmedabad and Maharashtra’s capital Mumbai. This is the reason that on Monday, Railway Minister Ashwini Vaishnav and Minister of State for Railways Darshana Jardosh, along with a team of officials associated with the project, reached to take stock of the bullet train project line from Surat to Navsari. Speaking on the occasion, Railway Minister Ashwini Vaishnav said that he is confident of achieving the target of running the country’s first bullet train between Surat and Bilimora in Gujarat in 2026. He said that very good work has been done in this direction. He further said that good progress has been made in the construction of infrastructure for the bullet train between Ahmedabad and Mumbai and the work is being done at a brisk pace.

Railway Minister Ashwini Vaishnav inspected the operation of a sectional casting yard of Mumbai-Ahmedabad High Speed ​​Rail Corridor near Vaktana village in Choryasi taluka of Surat on Monday. Apart from this also visited Antoli Railway Station under construction under the project. After this he along with Minister of State for Railways Darshan Jardosh also went to Nasilpur in Navsari where he also visited the project site.

Railway Minister gave information
After the inspection, Railway Minister Ashwini Vaishnav said that for the bullet train project, pillars have been installed on 61 km route and work is in progress on about 150 km route. He further said that 91 per cent of the 508 km long project is elevated, only four km long line is on the ground. He told that the seven kilometer part will pass through the sea in Maharashtra. He said that a total of 12 railway stations would be built on this line. Of this, eight will be in Gujarat and four in Maharashtra.

The Railway Minister said that it is the goal of Prime Minister Narendra Modi to provide ultra modern and best services like redevelopment of railway stations, new Vande Bharat trains, automatic train protection system, bullet trains. He said that we are working to fulfill the aspirations of 130 crore Indians.

Work slow in maharashtra
Speaking about the work being done on the bullet train project in Maharashtra, he said that the work has slowed down due to problems in land acquisition there. He also said that Maharashtra should work on the project in the spirit of cooperation and cooperation.

Earlier, addressing the bullet train project workers at a site in Surat, Railway Minister Ashwini Vaishnav told them about the Centre’s ‘One Nation, One Ration’ scheme. He said that the central government is working under the leadership of Prime Minister Modi with the spirit of service and development for all.

The project aims to run a bullet train with a speed of 320 kmph on the High Speed ​​Rail (HSR) corridor between Ahmedabad and Mumbai. The target has been set to reduce the travel time between the two cities by train from the current six hours to about three hours.

The government will also get the support of the main opposition party Congress regarding the Agneepath scheme in the Punjab Assembly session. Leader of Opposition...
Previous articleKanpur Violence: Poster of 40 suspects involved in violence released, police sought help from people for identification
Next articleDAC: Modern weapons will be purchased for the armed forces at a cost of Rs 76,390 crore, decision in the meeting of the Ministry of Defense