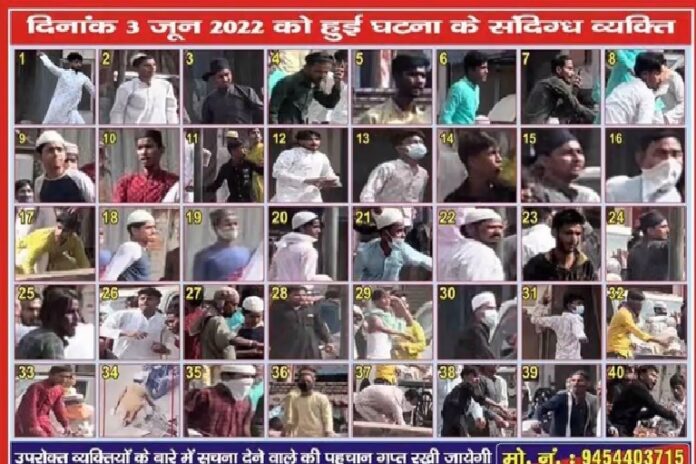 Posters of 40 suspects involved in the ruckus and violence in Kanpur have been released. In the case, Kanpur Police has registered an FIR against 15 handles for disturbing the communal atmosphere through Twitter and Facebook posts.

Kanpur Police has released posters of 40 suspects involved in the ruckus and violence that took place on June 3 on the basis of CCTV footage. He also appealed to the people to help in the search of the suspects. Phone no in the poster. 9454403715 has been marked. It is also written that the identity of the person giving information about the suspects will be kept secret.

In this case, the Kanpur Police has registered an FIR against 15 handles for disturbing the communal atmosphere through Twitter and Facebook posts. Many big criminals of the city including IS-273 gang were involved in the ruckus and violence. The police have made about a dozen accused including the active gangster Afzal. The arrests of all these have started. One or two have also been taken into custody by the police. These people were the ones who spread violence on a large scale. Fortunately, the police force brought the ruckus under control in time.

In the investigation of the police so far, the name of PFI has come to the fore apart from the organization of Hayat Zafar Hashmi. Evidence has also been collected by the police. Meanwhile, the police investigation revealed that Afzal of the IS-273 gang has played a big role. Apart from this, the names of criminals like Sablu, Babar, Israel Atta, Farhan Kalia, Faiz, Sufia Kankhda, Jain, Masoom, Naseem alias Bunty, Guddu Riyasat, Dilshad, Galrej, Talha Ansari have come to the fore. IS-273 is the same gang that was earlier the D-Two gang. In 2010, the D-Two gang was abolished and a new gang was formed.

On the day of the violence, 18 miscreants were nabbed. All of them were sent to jail on Saturday. On Saturday morning, the police arrested the mastermind of violence Hayat Zafar Hashmi and his accomplices Javed Khan, Mohammad Rahil and Sufiyan from Lucknow. These four accused were interrogated throughout the night. After this, they were produced in the court at around 3 pm on Sunday. From here he was sent to jail.

The government will also get the support of the main opposition party Congress regarding the Agneepath scheme in the Punjab Assembly session. Leader of Opposition...
Previous articleSidhu Moosewala: On Tuesday, Rahul Gandhi will visit village Musa, will meet Moosewala’s family
Next articleBullet Train Project: When will the bullet train service start in India, Railway Minister Ashwini Vaishnav revealed