Just before Prime Minister Narendra Modi’s visit to Punjab, central agencies issued a terror alert on Sunday. In the inputs related to the attack, information has been received that Pakistan’s intelligence agency ISI is in the process of carrying out a major terrorist incident in the Union Territories of Chandigarh and Mohali. After this, the security of the interstate bus stands and public places in both states increased.

Following inputs from intelligence agencies, Punjab DGP Gaurav Yadav has also started consultations with senior police officials to beef up the security of major cities of the state. He has directed the police chiefs of the districts to deploy additional police force at the bus stands, government offices, and public places in the cities. The DGP has been instructed to take extra vigil, especially in the seven bordering districts of the state.

After the confidential meeting of the DGP on Sunday, the additional police force was deployed at the bus stands and public places of Mohali including Chandigarh. Also, public transport is being checked by CRPF and police in both the cities. During this, the police also checked the luggage of the passengers.

Terrorist Pannu warns PM
Gurpatwant Singh Pannu, the head of the banned terrorist organization Sikh for Justice, has given a warning before the Prime Minister’s visit to Punjab. Pannu has released a video saying that Punjab has returned the Prime Minister earlier also, and will return this time also. Pannu has said that Khalistan supporters have reached Mullanpur, he has reached a plebiscite, which will oppose the visit of the Prime Minister. Let us inform you that on August 24, Prime Minister Narendra Modi will inaugurate the Cancer Hospital in New Chandigarh, Mohali. 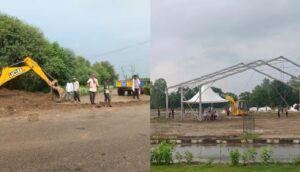